4 weeks ago I came home, took my bra off (who DOESN’T do this?) and went to the loo. A normal after work ritual.

I always check my boobs but that night I had an itch to the left of my left breast where my bra had been and I felt a large swollen lump. At first I thought it was where I had taken my bra off which had been a little tight by the end of the day. 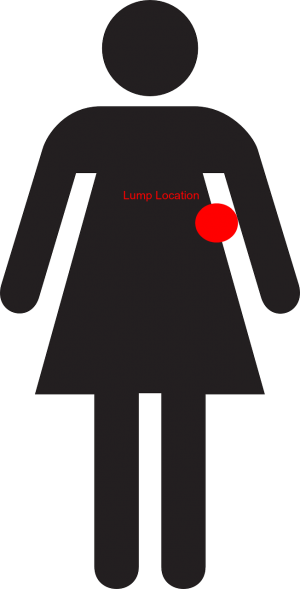 My first instinct was to check the right hand side of my body in the same place and I couldn’t feel the same lump there.

I went to the mirror and checked it out, to see if it was visible. It was.

I felt a bit sick but thought it would probably be nothing. I ran downstairs and asked Claire if she could see a difference. At first she couldn’t see anything but when I moved my arm across my body she could clearly see the lump. She could feel it too.

I decided to sleep on it but if it was still there in the morning I would immediately book an appointment to go to the GP that day.

In the morning I woke up and although it didn’t feel as big it was still there. It doesn’t move, it feels attached, stuck in one place.  I booked the appointment for that morning.

I went to the doctors, was examined, weighed and asked if I had considered weight loss surgery (I mean, come on!) and I was given antibiotics initially, mainly because I said it hurt (which it does when you prod it). I think they were worried it might be an infection. I was asked to come back in two weeks but the only appointment was in 8 days. I booked it. Surely I would see a difference?

By the appointment on the Friday I still had the lump. The antibiotics had not worked.

I went to see another GP in the practice who said that the size of it was his only concern. Normally they would say it was just a Lipoma (a fatty fibrous lump) but the size concerned him so he sent me for an urgent Ultrasound. He measured it at around 5 inches. He confirmed it was not in my breast but more to the side and towards the pleural cavity.

I had a call a couple of days after inviting me to the Ultrasound on the following Friday. This was a relief. I felt that this would clear all of it up and it would be the end of it. 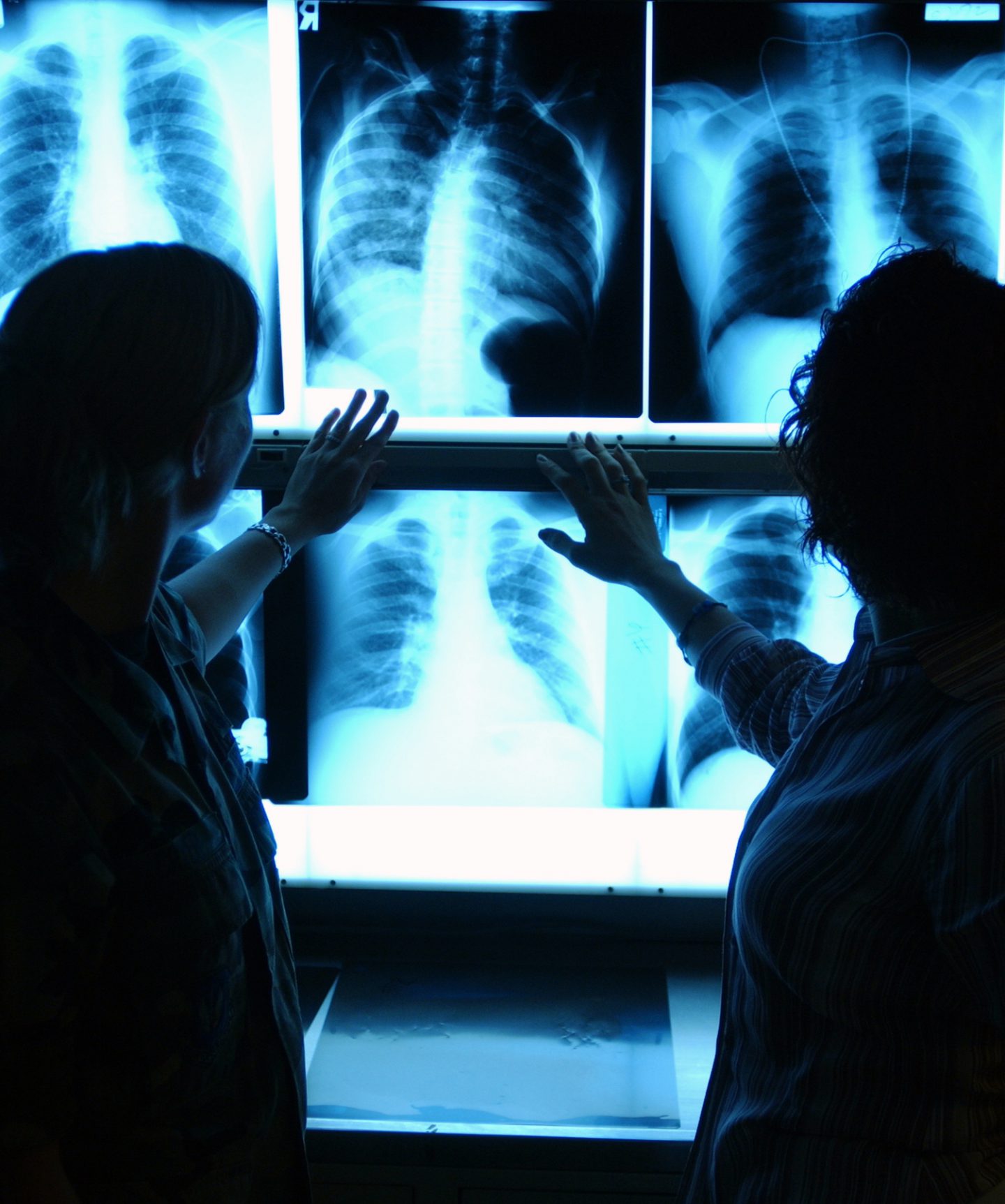 The following Friday I went to the Ultrasound appointment. On arrival I was given a gown to ‘cover my decency’ and I replied that it would take more than a gown to make me decent to two deadpan faces.  (HEY, IT WAS HILARIOUS!)

As the radiologist did the ultrasound I joked once again asking if there were teeth in there or fingernails as it could be a missing twin… again….NOTHING (come on guys, I thought it was really funny!).

He mentioned it was ‘attached’ and ‘too deep’ to be a Lipoma, fatty lump. He confirmed that he wasn’t sure and that further tests would be expected to see it properly. The Ultrasound really wasn’t able to make a clear picture.

I wasn’t worried. I could see it wasn’t one solid lump. Like lots of little things clumped together really – a bit like it feels.

In my head I was still ok but the following Tuesday I was called by my doctor with my results and asked to come in.

Things you need to know about me:

However, I had a wave of fear but thought maybe they just wanted to reaffirm my need for additional scans.

At 5.40 that evening I had my appointment. I had been working all day so I was distracted.

I was ok when he was telling me because in my head I decided that he was only telling me the worst case scenario and it’s more than likely NOT Cancer. I mean how can it be? I feel ok. I am not in pain or feel sick. I put that to him. And he replied that that can be the case. Apparently Sarcoma can just grow. Anywhere. And you only notice when you notice.

He told me he has urgently requested the scan and I will be in within 2 weeks.

I replied that at least then I will know it’s NOT Cancer. Because as I left that office and that GP surgery I was in complete denial about it possibly being cancer.

However, when I got home it festered. It has festered so much.

The next day I woke up and I was upset (another stage of grief?). I kept spontaneously crying. I was meant to be in a meeting in Manchester that day and I was getting ready but I couldn’t stop crying.

As I said before, I don’t cry often.

However I felt scared. Suddenly I was scared because it is the unknown.

I just kept thinking that this is really terrifying too, that MANY MANY people who have Cancer and who do not but went because of a lump or another issue have been through this too.

All of a sudden I was one of them. I felt such a different empathy.

When I heard the words, when I felt the things the next morning and how I feel now I can only assume every person has done this that has been in this position.

The things that scare me the most at this point if it turns out to be cancer:

On top of all this I have some really rubbish family stuff going on, how will I cope? How will they? Will they?

I do hope it’s the latter.

I know me, I know I will challenge whatever happens. I know it will  be a fight I will really fight. I have a lot of strength. I have a great support network. I know I can do it.

But till I know I don’t know how much effort I need to put in to fight.

I will keep up the blog posts because if this raises awareness at all and it helps one person I will be happy.

In the meantime I will leave the link to Sarcoma UK – the national charity for Sarcoma Awareness. Please check it out. It’s not something I had heard of so it’s important to highlight it. 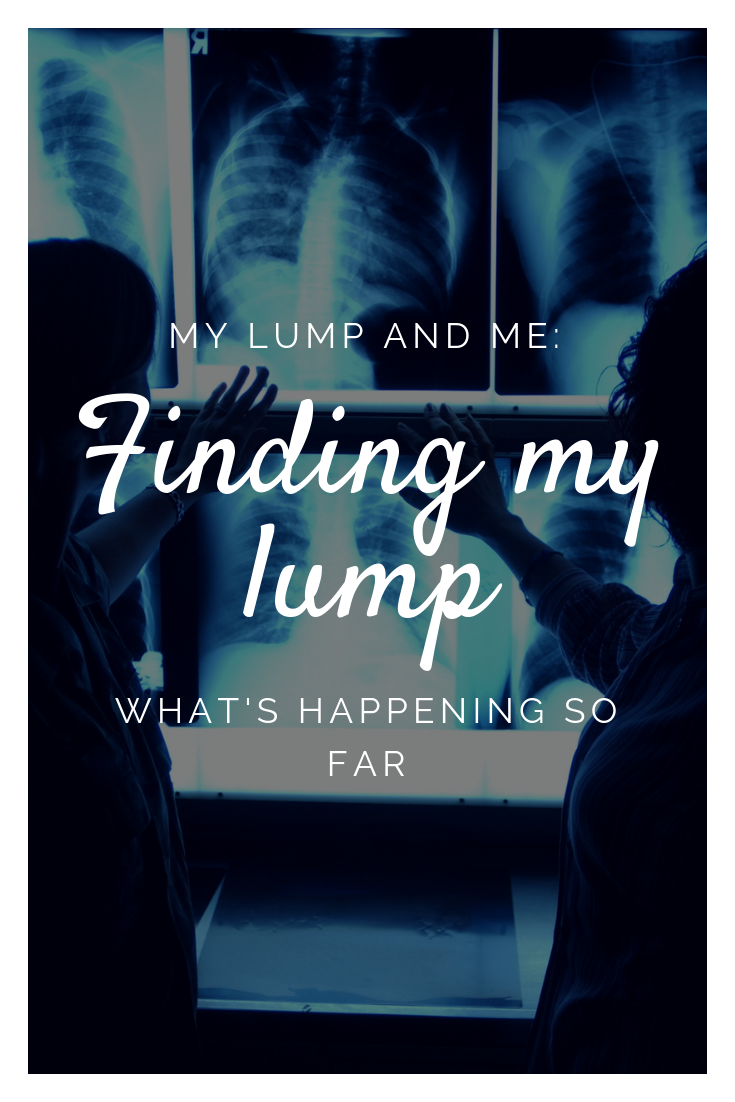 It was 14 degrees today and I still decided it was

If you're having a good hair day TAKE ALL THE PICT

My eyebrows!!! Who else has curly hair and curly e

It was 14 degrees today and I still decided it was

If you're having a good hair day TAKE ALL THE PICT

My eyebrows!!! Who else has curly hair and curly e